Sounds of Solidarity: When We Burn 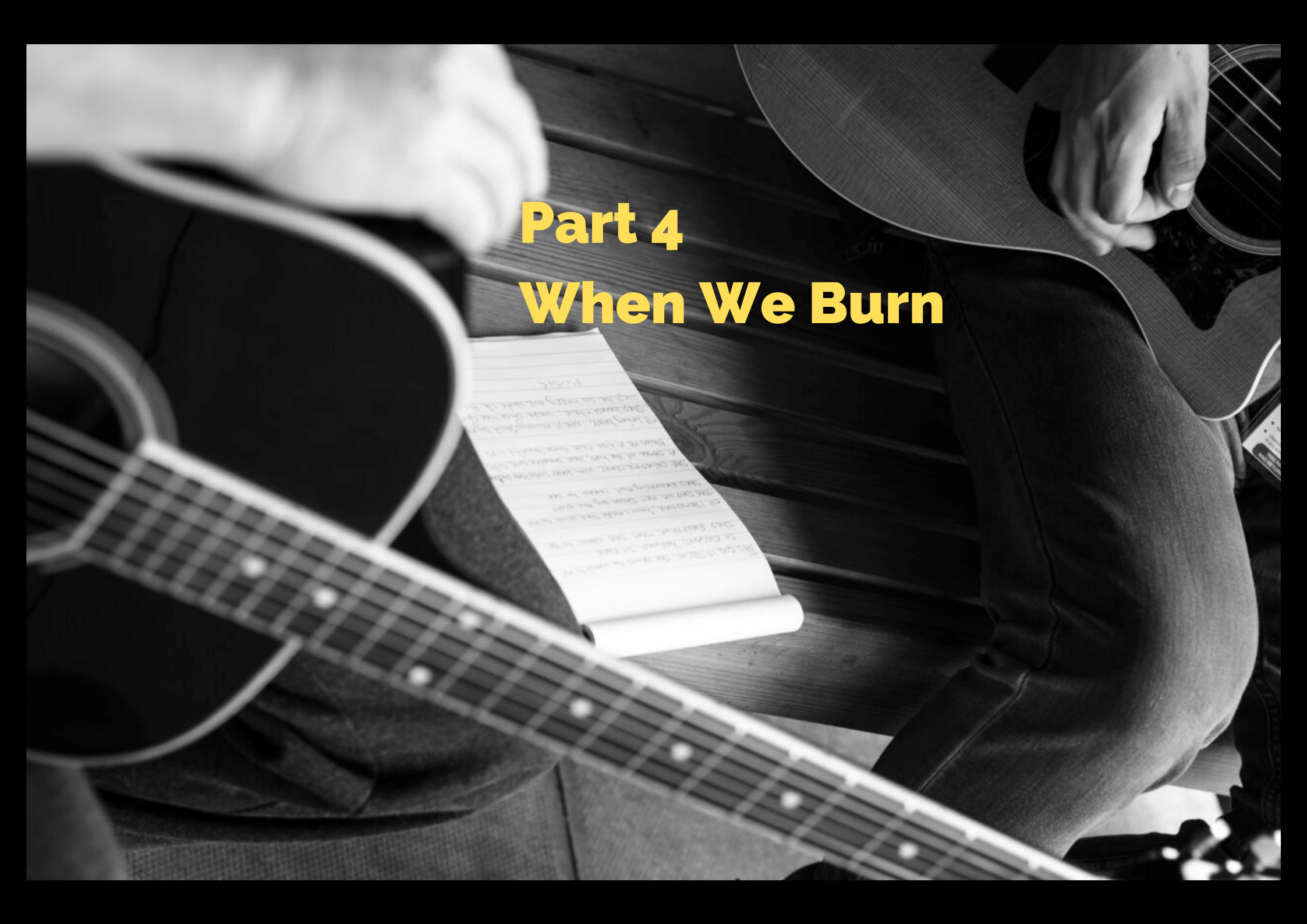 Part 4 of the ‘Sounds of Solidarity’ series, exploring and sharing learning from our remote songwriting experiments. For more information, read this introductory post by Alison Urie.

From the kick-off there was a very laid-back atmosphere in our group and, although we were sure we’d all enjoy working with each other, we were not so sure about how we would achieve our goal. We also quickly recognised the differences between writing as a group in person and using Zoom – no immediacy in bouncing ideas back and forward, less possibilities for singing and playing together etc.

At the first Zoom meeting, Kris suggested that to get started we could put the theme of ‘Solidarity’ to the back of our minds and concentrate initially on words and phrases we found attractive (we could later link them to the theme). This was a bit alien to us as a process but we went with it and were eventually rewarded for our open-mindedness!

Kris got us started by introducing a couple of poems and encouraging us to look at other poems, song lyrics and pictures we liked. Some of us used the ‘cut-up technique‘ to make something new from old poems. Another of Kris’ suggestions was to include a ‘forest fire or the Southern/Northern Lights’ in our writing.

We created a Dropbox folder that we could all add writing and musical ideas to as we went along, creating a big content bank. We also used the comments section of Dropbox to keep the momentum going.

Our resultant collection of ideas included writing and pictures from Hannah on the staff at Dunvegan Fire Station, Skye. Hannah reflected that these photographs portrayed “a sense of camaraderie, solidarity and courage among those working to keep people safe.”

We were all drawn to this concept of people coming together to protect their community when times get hard. We also spoke about fire as something that brings people together – a source of light and warmth where people gather.

Gordon (one of the musical members of our group) composed a guitar-based backing track to accompany Hannah’s writing. Kris then took Gordon’s chords to create a verse, weaving together some of our shared writing to form lyrics.

We were all delighted with the direction the song was taking and agreed that the line ‘when we burn we lick the rafters’ would make a great refrain.

Richard (another muso in the group) provided the middle eight chords and some words for a second verse which Kris honed while Gordon provided the words for the third verse.

We decided the middle 8 should be two sections with a change of key, consisting of an instrumental section followed by one with lyrics.

Kris joked that we should get George Harrison in to write the instrumental part, whereupon Gordon fished out his rarely used Leslie organ style guitar pedal and threw in just what we were looking for – a psychedelic, trippy, mellotronic sounding instrumental. Claire provided some lyrics for the second section and added harmonies to the demo. We had discussed earlier that it would be good to have a second voice, preferably female, on the track.

We soon had a rough mix of our song! We all threw in our comments and with minor adjustment, the final recording was ready.

Working as we did meant we were all ‘present’ in the song- whether through our lyrical or musical ideas. There was a sense of solidarity in our process, which sought to include everyone.

Leave your colours at the door

It’s not what we all came here for

It’s such an ordinary time

We walk together through the smoke

As thick as ivy on an oak

And as close as we grow older

The ash is grey but it still smoulders

Bindwood and lovestone wrap my bones

The drone of bees will guide me home.

Raise a glass and cast a line

Your worries rusting in the brine.

Nothing lost, nothing gained

Nothing ever stays the same