The latest Streetsigns podcast & blog focuses on our Unbound Community and the impact of using creative practices to address criminal justice. Read and listen below:

How do you imagine a new kind of life if you have served time in prison? How can music help people trying to walk that line out of prison to a free life?

In this podcast we visit an extraordinary project called Vox Liminis based in the Gallowgate, in Glasgow’s East End that uses creative practices to challenge and change criminal justice. Vox hosts ‘Distant Voices, Coming Home’; an innovative research partnership between the Universities of Glasgow, Edinburgh and the West of Scotland. The project uses music and songwriting to help people both inside prison, and former prisoners to reckon with their past, embrace their present and reimagine their future.

It begins with an evening at Unbound, their Tuesday night songwriting session and what I saw and heard was inspirational; we shared a meal, experiences and made music together. In this edition of Street Signs, we’re going to meet some of the people involved in this project, hear some of the music and learn about the links between criminology and songwriting.

Iain explains how he got involved.  “I was in prison for a number of years. Got to know Vox Liminis as they were coming into prison, and when I started to get home leaves, I would attend here on a Tuesday night. The people were non-judgmental, very welcoming, friendly, complete contrast to some of the other things I was having to deal at the time and I’ve just kept it up ever since.”

It seemed to me that the song writing creates a sense of community. I asked Ian if that’s how is appeared to him.  “I think it’s better than that. I think being in prison, it’s hard to trust people. You’re dealing with officialdom, which is a very particular thing…. It’s easy to distrust people, it’s easy to think that they’ve got an agenda or you know, that some other angle that they’re coming with; that’s just not the case with Vox. It goes beyond that because… they’re friendly, everybody’s in it for 100%.”

There’s something interesting about a project coming out of people’s experience and their imaginings.  Then someone else brings it to voice or someone else brings that experience out. I asked Iain what that felt like: “Yeah, it’s a rewarding thing, I’ll never forget it, the whole thing from start to finish was something that will last. Hugely beneficial, quite a good thing. don’t really get a chance to express yourself in prison the same way.  And I think the freedom to use your imagination, to come up with something, that frees you, the walls and the barbed wire a wee bit, doesn’t it?  Prison can be quite bleak place, songs can bring that wee bit of sunshine in.”

Isn’t that just an extraordinary thought ‘bring a wee bit of sunshine in…’  The songs bring light to a dark place, they free the imagination, they connect and they offer expression.  Witnessing this first hand was extraordinary and what was so amazing was regardless of whether you were a complete novice and a beginner or a very accomplished player, somehow the collaborations worked and songs emerged. Beautiful songs emerged. And something about the playfulness as well as the meaningfulness of the songs too, there was a lot of humour but there was also a lot of tough experiences being reckoned with through the songs. As Donna Maciocia, one of the songwriters involved in Vox, commented: “It connects the mind and the heart.”  You can hear all this unfolding in this podcast which is the first in the new series of the Streetsigns podcast in which music and music making is a key theme. 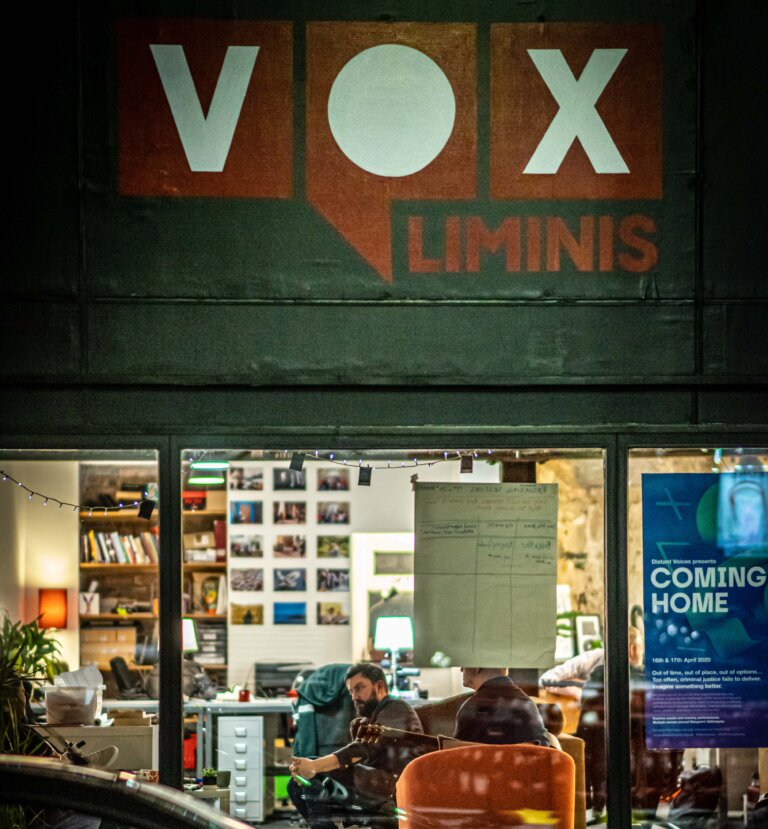 Becoming Different Together by Les Back